The Intuitive Pointing Device (IPD) successfully completed sea trials after spending 4 days underway in French Guiana. The trials were conducted by the French Navy’s Naval Programs Centre of Expertise (CEPN), together with La Confiance’s crew, SOCARENAM & SEAOWL TECHNOLOGY SOLUTIONS. The goal was to analyze the operational contribution of the IPD to the NEXTER NARWHAL 20B weapon system use.

The French Directorate General of Armaments (DGA), on January 16, awarded NEXTER and its co-contractor Naval Group a contract for the modernization of the Narwhal 20B Remote Weapon System (RWS) fitted aboard all French Navy surface vessels. This upgraded version will bring a number of improvements to the existing RWS.

It is within this framework that the IPD has been tested to support the requirements of the upgraded version of equipment. As a matter of fact, the IPD has the ability to couple with any RWS and the coupling with the NEXTER gun has already proven its efficiency, as announced during the EURONAVAL 2018 exhibition. 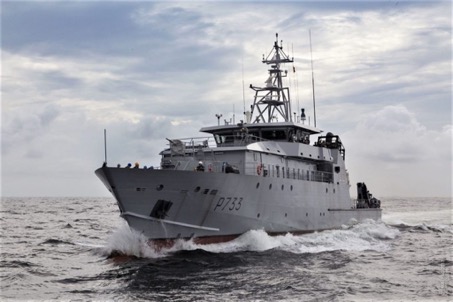 During the trial campaign, the speed and accuracy of the delivered 3D designation data with the aim sight and the quality of the IPD zoom-in camera were a real contribution especially for the video return for the gunner on the bridge, validating that the RWS and the IPD reticles correspond at all times. The French Navy was able to detect an RHIB coming in their direction with a long 2.7Nm distance. They were able to recognize the RHIB-type vessel at a distance of 1.6Nmand when the RHIB was still 0.5Nmaway, they detected with certainty the number of persons onboard.

Moreover, there was no parallax effect detected while different configurations, such as stationary operator performing one rotation, several steps movements around the base and free movements, were performed within a radius of 5m. The relative position of the operator with respect to the IPD installation position, the Narwhal 20B position, was not influent.

Trials were cleared with great satisfaction onboard and a real appreciation of the IPD contribution to the Narwhal 20B considering the reduction of the reaction time, minimizing sensor-to-shooter loop, and its outstanding accuracy, following the cherry killer up to 3000 meters.

SEAOWL TECHNOLOGY SOLUTIONS plans to continue development work on the IPD – Narwhal 20B coupling throughout 2020, with an aim to achieve continuous deployment of the system for real-life operations. The ultimate objective is to deliver a system that complements and enhances the capabilities of the RWS, considerably improving man-machine interface.

About the Intuitive Pointing Device

First, by widening the narrow field ofview of their tracking optronics thanks to the reflex action of an operator benefiting of a larger peripheral vision.